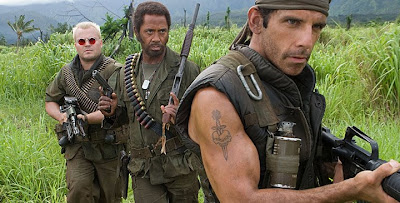 "Tropic Thunder" is a cruel movie. Just when you think it's squeezed every last gasping belly laugh out of you, here comes another barrage of scathing hilarity. The picture is, among several other things, a bunker-buster assault on political correctness, and howls of unhappiness are already being heard from the usual PC precincts. But then how often can that be helped?

It's a movie about the making of a movie — a blockbuster war epic set in Vietnam in 1969. This film within the film, which is also called "Tropic Thunder," is a traditional tale of bloody heroism and great big explosions, with a motley cast of head-case actors. Tugg Speedman (Ben Stiller) is a fading action star desperate for a comeback after an ill-advised bid for Oscar credibility — a movie called "Simple Jack," about a, uh, developmentally challenged guy who can talk to animals — left him a laughingstock. Kirk Lazarus (Robert Downey Jr.) is a blond, blue-eyed Aussie whose pompous commitment to his craft ("I don't read the script; the script reads me") has driven him to undergo skin-pigment alteration in order to play a black Army sergeant in the film. Jeff Portnoy (Jack Black) is the drug-gobbling star of a lucrative series of dimwit pictures devoted to a family of fat, flatulent buffoons. And Alpa Chino (Brandon T. Jackson) is a rapper-turned-actor who also rakes in millions with his hip-hop energy drink, Booty Sweat. The fifth member of this odd squad, a kid named Sandusky (Jay Baruchel), busies himself trying to make sense of what the other four nutcakes are doing, with only intermittent success.

The movie's movie is being shot on location in Southeast Asia, and it's a disaster from the outset — the production is already a month behind schedule after just five days of shooting. Combat consultant Four Leaf Tayback (Nick Nolte), the crusty vet upon whose battle memoir the picture is based, convinces the in-over-his-head director, Damien Cockburn (Steve Coogan), that the only way to salvage the picture is to chopper the pampered actors out into the middle of the jungle, drop them there and shoot the action guerilla-style, to "get some real fear in their eyes." When a gang of actual guerrillas — not the Viet Cong of the movie's long-ago war, but hopped-up thugs guarding a jungle heroin factory — start shooting at these interlopers, the actors, armed only with SAG cards and blanks, find themselves called upon to fight back for real.

"Tropic Thunder" is so savagely and unremittingly hilarious that one hesitates to give any of it away. However, it has to be said that Downey delivers the most fearless and astonishing performance of his current career renaissance. It's been amusing to watch various media outlets attempt to whip up some kind of "blackface" controversy over Downey's performance, when it's nothing of the sort. He's playing an actor with the deluded conviction that he can not only portray a black man, but also bare a black man's soul. There's not a hint of minstrelsy in Downey's performance; it's a marvel of satirical precision directed at a specific variety of Hollywood cultural arrogance. And it's more than that, too. The scene in which the derisive Alpa Chino nails Lazarus' recitation of black-uplift homilies as nothing more than the lyrics to the "Jeffersons" theme is funny; but the one in which Lazarus quietly explains to Speedman that his "Simple Jack" character failed because he made the mistake of going "full retard" — rather than softening his character with cuteness in the manner of "Forrest Gump" — is so on-the-nose accurate, it takes your breath away. (Film scholar and critic Dave Kehr has pointed out that Downey's black GI seems to be modeled on the one played by blaxploitation icon Fred Williamson in "The Inglorious Bastards," the 1978 Italian movie that's currently on the verge of being remade by Quentin Tarantino.)

"Tropic Thunder" brings out the comic best in a number of other actors, too, among them Matthew McConaughey as Speedman's oily agent, and the wonderfully cracked Danny McBride as Cody, the movie's explosives expert. (The extent of his expertise is a little worrisome: "I almost blinded Jamie Lee Curtis on 'Freaky Friday,' " he admits.)

But the movie's most uproarious performance — as all but the most oblivious infants must know by now — is provided by Tom Cruise, playing a fantastically vile and abusive producer named Les Grossman. Buried under layers of latex and padding, Cruise is almost unrecognizable, and this anonymity seems to have liberated him — he dives into the character's bellowing, obscene tirades with ferocious abandon. It's a performance unlike any he's given before, and you can almost see the screen smoking after each of his foul harangues.

"Tropic Thunder" is both a parody of a big-budget action movie (Willem Dafoe's Christ-on-the-cross death spasm in "Platoon" is referenced not once, but twice) and a real one, too. So its sometimes gritty visual texture bears no relation to the tidy slickness of most contemporary comedies. (John Toll, the cinematographer, also shot "Wanted" and "The Last Samurai.") But the picture's satirical brilliance is on another level of accomplishment. Ben Stiller, who directed the film, cooked up the story with Justin Theroux, and then brought in Etan Cohen to help them write the script. That they have pulled no punches in lampooning Hollywood's self-congratulatory treatment of race and disability — not to mention gay monks, wispy mysticism and celebrity adoptions of exotically tinged foreign babies — is a wonder.

The movie is also a welcome affront to the sort of humorless PC scolds who mobilized for the movie's L.A. premiere on Tuesday — in numbers estimated by Entertainment Weekly to be "a few dozen." Maybe the tide of whiny complaint is turning. Have any of these people noticed yet that the only child in the movie is a chain-smoking, gun-wielding heroin kingpin? Or is a protest poster already at the printer's? Considering the business this picture's going to do, good luck.
Posted by Robalini at Thursday, August 21, 2008