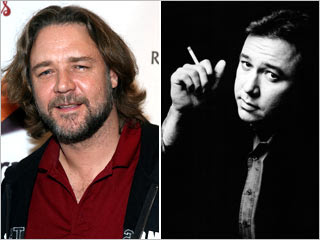 Russell Crowe as Bill Hicks?
Aug 25, 2008
by Gary Susman
Categories: Deals, Film, To Care or Not to Care

Not sure how I missed the news that Russell Crowe wants to play Bill Hicks in a biopic of the late comedian. The actor is quoted talking about the project here, and a recent radio interview with longtime Hicks collaborator Kevin Booth (h/t to the Dead Frog comedy blog) confirms Crowe's role in commissioning a screenplay, which is not yet finished. I'm also not sure how I feel about the idea, since Crowe (who's not known for his jocular side) is already 12 years older than Hicks was when he died at 32, and since a botched biopic would trivialize Hicks as just another E! True Hollywood Story casualty, a guy who smoked too much and courted controversy and died of cancer on the cusp of fame. On the other hand, Booth's participation should ensure that Hicks gets the respect he deserves; and Crowe is protean and versatile enough to play pretty much anybody (Exhibit A: The Insider). Besides, Crowe reportedly wants to focus on performance sequences than biographical scenes, and anything that gets Hicks' legendary stand-up material more circulation (even in mimicked form) is good.
Posted by Robalini at Saturday, August 30, 2008

He sure looks like him, I dont find Crowe acting skills that good, but sure managed to land some good roles.