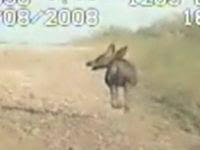 The chupacabra could be more than a legend, a deputy sheriff suggested last week, after videotaping an unusual creature during one of his patrols. The video reveals a dog-like animal; however, there are a couple of physical features that drew suspicion it may not be a dog or a coyote: apparently its front legs are slightly shorter than the back ones, while the head revealed an unusually long snout.

The name of the legendary creature chupacabra comes from Spanish, and it literally translates as “goat sucker.” The animal has been reportedly spotted in multiple locations across North and South America, from the United States, to Mexico, Puerto Rico and Chile.

While the scientific community continues to dismiss the existence of the chupacabra, calling it an urban legend, the animal has been held responsible for unusual attacks on several types of animals, from chickens to turkeys, dogs, sheep and cows.

The killings have been attributed to the mythical creature due to the signs left behind: puncture wounds and the lack of blood in the attacked animals.

Although the physical descriptions of the creature vary from one region to another, the most recent reports talk about a sort of a hairless dog- or coyote-like creature. However, examination of the carcasses left behind revealed a not so unusual fact: the attacked could have been a coyote with mange, a parasitic infestation that causes loss of hair and inflammation.

The most recent encounter with the creature, which was caught on tape, resulted in the following description: nig teeth, big head, short legs in front, longer legs in the back, not a dog, unlike any other animal ever seen. It does sound like a chupacabra, doesn’t it?

“I shouted: It’s a chupacabra!” patroller Ellie Carter described her encounter with the animal. “I recognized it instantly from TV,” she added, saying the creature was like no other animal she had ever seen, although she grew up on a farm.

However, scientists might disagree with the assumption that it was indeed a chupacabra, based on a 2007 investigation which revealed that the blood-sucking dog was in fact a coyote suffering from extreme mange.

Logically speaking, if that’s possible, all signs seem to indicate striking similarities with dogs or coyotes, but there is still one troubling fact: why do these unusual attacks leave completely blood-drained bodies behind?

In recent years, there have been multiple reports on chupacabras attacking livestock, and the news didn’t just come from the Americas, but also from Russia, the Philippines and Australia. On every single occasion, the witnesses spoke of horrific creatures that stroke fear into the hearts of animals and men alike.

Authorities continue to investigate the tape and are now looking for clues on the animal recently spotted. The first assumptions are that it may have been a coyote, possibly crossed with the grey fox, but what if it wasn’t? Is the chupacabra merely an urban legend?
Posted by Robalini at Thursday, August 21, 2008