From Fight the Smears:
http://my.barackobama.com/page/invite/christian

The truth about Barack Obama's faith

Truth: Senator Obama has never been a Muslim, was not raised as a Muslim, and is a committed Christian. Further, this myth perpetuates unfortunate falsehoods about the Muslim-American community that are offensive to people of all faiths.
*
Below is a uncovered copy of Barack Obama's childhood school registration, which shows him registered (under the name Barry Soetoro) as Islam in the category of religion. 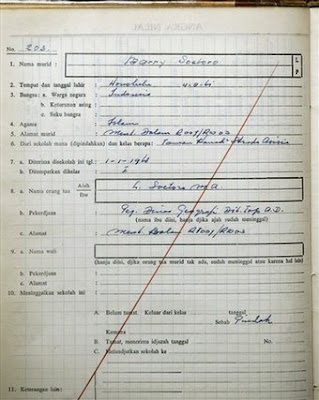 For the record, I don't care that Obama was raised as Muslim at least at one point in his life. Indeed, in theory, that would be a sign of a positive, tolerant, multi-religious view. What is the issue is that Obama and his campaign continue to lie about very basic facts involving his own history.
Posted by Robalini at Thursday, August 21, 2008