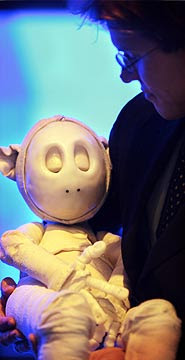 July 30, 2008
Heart Robot: red hot date at the Science Museum
Not the date Will Pavia was expecting
Will Pavia

Hurrying towards my assignation with a robot that could understand human emotions, I was quite excited. My ex-girlfriends say that I am incapable of understanding human emotion and it was hard not to think of the incredible impact this meeting might have on my personal life.

Equally, it was hard not to see the earth-shattering importance of my date with Heart Robot in the broader context of mankind’s developing relationship with machines. I had put on a clean suit and my lucky tie. I had purchased a red rose. I had prepared an arsenal of robot chat-up lines: “I think our systems are compatible”; “I’m like a machine in the bedroom”, and so on.

Would I need to confess my terrible history with technology? I am no longer on speaking terms with my home computer and relations with my DVD player have reached a state of irretrievable breakdown. It doesn’t work any more, no matter how loudly I shout at it. Nevertheless, as I headed to meet Heart Robot, I couldn’t help thinking that this time it would be different.

We met in the Antenna Room of the Science Museum, where it quickly became clear that all my preparations had been somewhat misguided. Heart Robot is small and white, with sunken holes for eyes and little sign of a mouth. He has pointed ears and a plastic torso padded with white cloth. He resembles the love child of a monkey and an iMac. I shake his hand — for some reason Heart Robot feels like a he — and knobbly plastic fingers grip mine. His heart is signified by a red light beneath a translucent plastic diaphragm; it beats a little faster as I grip his shoulder.

The robot, main attraction of the Emotibots exhibition, which runs at the museum until tomorrow, is covered in sensors that respond to movement and touch. Treat him rough and he tenses, his hands clench, he blinks with alarm. He can also register volume: he knows when you are shouting at him, but irony passes him by.

As he becomes accustomed to me his limbs relax and his heartbeat slows. His eyelids flutter languidly, disarmingly. He cannot stand alone, however, so his maker, David McGoran, a puppeteer turned robotics engineer, holds him upright. It feels as if there are three people in this relationship.

Mr McGoran believes that Heart Robot’s emotional literacy will be the pattern for future machines, be they toys, home computers, or technology monitoring hospital patients. “It’s a question of interface,” he says. “If you are shouting at your laptop and it has no idea then it becomes a useless interface.” I balk at the idea that my laptop might understand all the nasty things I say to it. “Well, that’s one of the questions we face,” he says.

In the vanguard of these developments are machines to monitor and help the elderly, and children’s toys. There is already a popular baby dinosaur called Pleo, which responds when its little owners are cross.

The development of these emotional machines will be influenced by the robots of films and television, in a curious case of life mirroring art. Also at the Science Museum was Matt Denton, 25, the animatronics engineer who built the enormous hydraulic robot for the film Lost in Space and the Hippogryph and the Fawkes of two of the Harry Potter films.

“Animatronics engineers are a dying breed,” he says. “We are being wiped out by computer graphics.” Many are moving into robotics, where their practical ability to develop robots that appeal to humans is a marketable skill.

Mr Denton serves as a consultant on the Heart Robot project. “I don’t see why we shouldn’t be able to love a robot in the future,” he says.

Unfortunately, we are still some way from developing suitable robotic girlfriends, and when we do they may well be based on the fantasies of men such as Mr Denton.

“Without a doubt the best robots are in Blade Runner, where they look human,” he says. One of them looked like Daryl Hannah. I decide to go home and patch things up with my DVD player. It might yet offer me a vision of future happiness.

A robotic stroll through history

— The first robots recorded were built in 250BC by the engineer and inventor Ctesibius of Alexandria. Ctesibius built water clocks decorated with moveable figures. As water flowed through his machines, the figures appeared to move

— Leonardo da Vinci was a pioneer of robot theory and his diaries of 1495 contain sketches for a humanoid figure capable of waving its arms, opening and closing its mouth and moving its head around on a flexible neck

— Complex mechanical robots were built by the French inventor Jacques de Vaucanson in 1738. His musical automatons included drummers, flautists and quacking ducks and are often credited with being the first true robots

— The first American robot is generally considered to be Elektro, built in 1937 by the Westinghouse railway company. Very much a product of his time, Elektro could smoke as well as walk

— Robots became increasingly functional and less recognisably human during the second half of the 20th century as they were incorporated into industrial manufacturing. Programmable paint sprayers and remotely operated arms joined and then replaced production line workers

— Robots such as Honda’s Asimo and Sony’s SDR can walk up and down stairs, recognise faces and even make very basic conversation
Posted by Robalini at Saturday, August 16, 2008