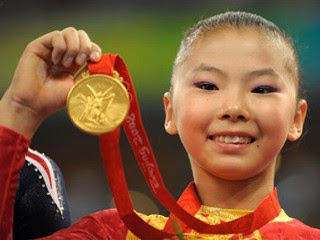 BEIJING – At least when the NCAA runs one of its bogus investigations of Big State U, it sends some people out in the field, conducts some interviews and then after a few months (or years) claims that the Ferrari Enzo the star tailback was driving really did come from grandma back home and not the booster or the agent.

The International Olympic Committee apparently sees no need for such pause or pretense.

The “investigation” it ordered into whether some Chinese gymnasts were under the minimum age of 16 was concluded after just a few hours Friday.

The not-so stunning verdict: The Chinese are innocent.

Please move along, now. Nothing to see here.

“We believe the matter will be put to rest and there’s no question … on the eligibility,” IOC spokeswoman Giselle Davies said. “The information we have received seems satisfactory in terms of the correct documentation – including birth certificates.”

While you slept, the IOC swept.

Sorry, the matter isn’t being put to rest no matter how many whitewash inspections are done. A real investigation does not take hours. It takes days or weeks or however long is necessary.

What exactly did they do except look at the same questionable info – government-issued passports – they had previously been presented? Did they ask He Kexin if she was 16, cross your heart and hope to die?

The Associated Press says the Chinese turned over information to the International Gymnastics Federation (FIG) on Thursday evening. It included the current and former passport, ID card and family residence permit for the double-gold medalist. All had the same and proper birth date.

That was enough for FIG, which by Friday morning had declared everything fine.

No word on the old websites, interviews with friends and families, a trip to the birth hospital or discovery of old school records. Nothing.

Perhaps this would have amounted to little and perhaps He and the others are, indeed, 16 – but this was nothing but the most ridiculous kind of propaganda.

A 12-hour investigation? Really? No one at the IOC or FIG has even the sense to think, “Perhaps we should at least pretend to care before simply clearing the gymnasts?”

The investigation by FIG was so fast word of its start didn’t make the Chinese government-controlled English newspaper China Daily. No news is good news.

This in the face of mounting evidence from multiple media and citizen investigations in America and England that showed more and more old registration forms, gymnastics websites and athlete logs that showed three of the six Chinese gymnasts used to list birth dates from 1993 and 1994, which would make them too young to compete at the Olympics.

In an effort to protect young athletes before their bones and muscles fully formed, FIG mandates that to compete in the Beijing Games a gymnast must be born in 1992 or before.

First came stories in The New York Times, The Associated Press and the Times of London that listed He’s birth date as a too-young Jan. 1, 1994. Then private citizens got involved. The latest was from a New York computer expert going by the name Stryde Hax who combed old Chinese documents on the web that found even more of the same.

Just last December government controlled media wrote stories about He calling her a 13-year-old “little girl” and a “star of the future.” The future became now when she showed up at the Olympics with a Chinese passport that claimed she was born Jan. 1, 1992.

There were also suspicions about two of her teammates. The birth date of Yang Yilin was listed on official national registration lists posted by the General Administration of Sport of China website for three years from 2004 to 2006 as a too young Aug. 26, 1993, according to the AP.

Perhaps the birth date of one gymnast could be confused one time, but half the team on multiple occasions? Considering 2000 Chinese bronze medalist Yang Yun later admitted on state television she was 14 that year, the IOC or FIG should have been all over this.

Instead, they did nothing until the USOC requested action. Then they just brushed it aside.

Having younger, and presumably smaller and more nimble athletes, can be a significant advantage in some gymnastics disciplines. Romania’s Nadia Comaneci scored seven perfect 10s in the 1976 Games when she was just 14, before FIG set the age limit.

This investigation isn’t fair to the sport of gymnastics, which will forever look suspiciously on the competition here. It isn’t fair to the United States, Romania and Russia, who all deserve to move up one spot on the medal stand if China used ineligible athletes.

And it isn’t fair to China, He and her teammates, who if innocent don’t deserve this to hang over their heads forever.

The IOC and FIG have never been about fair, though. They’ve been about kowtowing to the powerful and cashing the checks. They have so lost their way, have become so insulated by the power, they can’t even fathom no one is accepting a kangaroo court investigation.

Even the NCAA is smarter than that.
Posted by Robalini at Friday, August 29, 2008