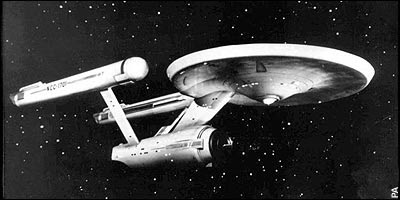 Star Trek technology: The reality
Much of the technology featured in the Star Trek films is either already a reality or under development. Here are some examples:
By Richard Alleyne
15 Aug 2008

The Personnel Halting and Stimulation Response (PHASR) gun is under development at the US Air Force Research Laboratory which like its science fiction counterpart can "stun" assailants. The real PHASR is a non-lethal, portable deterrent weapon which uses a laser system to blind the enemy temporarily.

Like their Star Trek equivalent modern mobile phones often have flip top lids and can - thanks to satellite navigation technology - be used to pinpoint your position. Unfortunately using them to "beam you up" remains a scientific dream.

Like the Star Trek device which translates alien languages, the US military is using the Phraselator in Iraq for speech translation. The website Google, among others, can translate web sites and phone manufacturer NEC is launching the first mobile phone with speech translation.

MRI and CAT scans can like Dr McCoy's hand-held tricorder device diagnose diseases by scanning the body. A San Diego-based company is developing a smaller portable device that when it touches the skin can detect illnesses.

Optical tweezers are a scientific instrument that uses a focused laser beam to provide an attractive or repulsive force. Unfortunately unlike the Enterprises tractor beam which can trap and pull in space ships they only work on a microscopic level.

Scientists in the real world have come up with all sorts of devices to copy the technology that renders Klingon ships invisible, from "stealth" radar-absorbing dark paint to active camouflage. In the long run they are looking at a special "meta" materials, that theoretically could make light curve around an object and so make it appear as if it were not there at all.
Posted by Robalini at Thursday, August 21, 2008