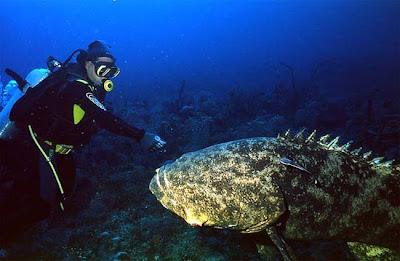 A man-sized grouper that trolls the tropical waters of the Eastern Pacific Ocean for octopuses and crabs has been identified as a new fish species after genetic tests.

"For more than a century, ichthyologists have thought that Pacific and Atlantic goliath grouper were the same species," said lead researcher Matthew Craig of the Hawaii Institute of Marine Biology, "and the argument was settled before the widespread use of genetic techniques."

Once upon a time, about 3.5 million years ago - before the Caribbean and the Pacific were separated by present-day Panama - they were, in fact, the same species. Now, DNA tests have revealed the two populations have distinct genes, indicating they likely evolved into two separate species after their ocean homes were divided by Central America.

Scientists disagree about how to define the term "species" and what separates species from one another biologically, though some say that a species is a group that can mate with one another and produce offspring that are not sterile. However, this biological definition doesn't always hold up, for instance, with coyotes and wolves (considered separate species), which can successfully produce fertile offspring. In this study, the scientists relied on differences in the fishes' genetic codes to establish the separate grouper species.

The new Pacific species, now designated as Epinephelus quinquefasciatus, is described in a recent issue of the journal Endangered Species Research.

"In light of our new findings, the Pacific goliath grouper should be treated with separate management and conservation strategies," said researcher Rachel Graham of the Wildlife Conservation Society in New York.

You know what, your posts are usually a pleasant understand however now I feel want it is put together a little quick.

I will become improper that but it surely simply doesn’t stream just like other
articles. Remorseful this.
Feel free to surf my page ... www.knopm.uw.edu.pl