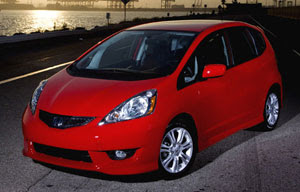 There was a time when economy cars were suffocatingly boring—4-wheeled penalty boxes whose main directives of low price and high mileage put a chokehold on any hint of driving excitement or style. But Honda’s Fit, along with other so-called “B-class” cars like the Nissan Versa and Toyota Yaris, represents a sea change in thinking, helped along by $4-a-gallon gasoline. Suddenly, it’s hip to be eco-square.

In its last generation, the Fit already had an edge on its competitors in the driving fun category, and the all-new model goes the extra mile with a stronger version of its 1.5-liter 4-cylinder engine. Now with 117 bhp (up from 109) with additional mid -range torque and high-end power from a more sophisticated i-VTEC valve-lift system, the Fit charges across intersections like a scalded…penguin (with 0-60-mph times likely in the high 8-second range, it doesn’t quite make “cat” status). And while some models drop by 1 mpg in the combined EPA mileage cycle, the sales volume leader—the Fit Sport—retains its 27 city/33 highway rating from last year when equipped with the excellent 5-speed paddle-shift automatic (a 5-speed manual is also available).

The new Fit is also roomier, its wheelbase stretched by 1.9 in. and overall interior width up by 1.2 in. And the cabin feels more airy, by virtue of a windshield whose base has been pulled forward by 4.7 in., and fixed front quarter windows that are three times larger than before. The dash styling is adventurous, more along the lines of the Civic, only without the double-tier instrument nonsense. The rear “Magic” seats remain…they articulate ingeniously to fold flat, or you can just tilt up and lock the lower cushions to put tall objects immediately behind the front seats. Headrests are now recessed into the seatbacks; they no longer need to be removed to fold the seats down.

While the base Fit starts at $14,550, the Fit Sport ($16,060) hits the sweet spot, its aero kit, more aggressive nose and 16-in. alloy wheels showing off the body’s forward-sloping wedge shape to best effect. The Fit Sport “Navi” ($17,910) pairs in- dash navigation with a yaw-control system. Whatever the choice, the new Fit is frugal with fuel yet rich with style. 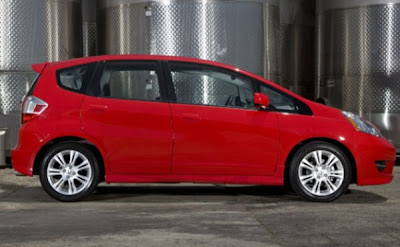