The Hopes of a Long Suffering 'Star Wars' Fan 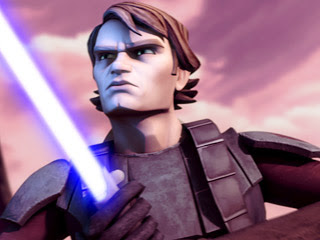 The Hopes of a Long Suffering 'Star Wars' Fan
Aug 14, 2008
by Christian Blauvelt

Like many a recovering Star Wars fan, I await the premiere this Friday of Star Wars: The Clone Wars with a mix of excitement and dread. Excitement for the opportunity to see a new vision of George Lucas's beloved universe brought to the screen. Dread that, if without meaningful character development or a coherent plot (did you see any hint of a story in those trailers?), director Dave Filoni's pixelfest could be as much fun as watching another person play a videogame.

And yet despite my frustrations with the franchise, I keep coming back. I love this mythology, this universe, and these characters.

That's why it was so refreshing to hear the rumor that fellow Star Wars aficionado Simon Pegg (Hot Fuzz), who's playing Scotty in the upcoming Star Trek, had declared his desire to write an episode of Lucas's long-gestating live action TV series, supposedly set between Episodes III and IV. Pegg supposedly worried, however, that he may have alienated Lucasfilm by publicly criticizing The Phantom Menace.

Star Wars needs an overhaul, like what Christopher Nolan did for Batman or what J.J. Abrams intends to do for Star Trek. I'm not saying Pegg's the one to reinvent the saga from a galaxy far, far away, but it should be a fan of the series who knows it and loves it. As the saga's creator, Lucas never felt what it was like sitting in a darkened theater as a young would-be fan not knowing what to expect, seeing "A long time ago, in a galaxy far, far away..." pop up for the first time, and bathing in John Williams' blaring fanfare as that imperial star destroyer first passed overhead.

Maybe because of his unique position of knowing and nurturing this universe from its inception, Lucas actually might not understand what it is that his fans want. Hence Jar Jar, "the taxation of trade routes," the Galactic Senate's parliamentary procedure, the "I hate sand" monologue, and Natalie Portman saying "Hold me like you did by the lake on Naboo."

Why I am hopeful about this new Clone Wars movie and subsequent animated TV series is because some of the best Star Wars stories told since the original trilogy have come from people other than George Lucas. Timothy Zahn's novel Heir to the Empire paved the way for a whole "expanded universe" of storytelling through dozens of novels, by authors like Steve Perry, Matthew Stover, and Troy Denning, that delve into a level of detail about the characters, alien cultures, and political events that make the films seem superficial by comparison. Likewise, Tom Veitch and Cam Kennedy's Dark Empire graphic novel series reveals a brooding, melancholy undercurrent to the Star Wars universe that would seem to be jarringly incompatible with the gleaming surfaces and Flash Gordon thrills of the movies. Many fans consider the videogame Star Wars: Knights of the Old Republic to be the best Star Wars story since The Empire Strikes Back. And from 2003-2005, Genndy Tartakovsky's Clone Wars micro-series injected new dynamism into a franchise that had apparently lost all of its kinetic charm.

These books, graphic novels, video games, and cartoons show that Star Wars has infinite possibilities. But when it comes to live-action films (or even the upcoming live-action TV show), Lucas has made it clear it's his vision or nothing. Dale Pollock's biography Skywalking: The Life and Films of George Lucas reveals Lucas even resented the psychologically-charged direction Irvin Kershner chose to take The Empire Strikes Back. (Check out this fascinating fan Q&A with Pollock in The Washington Post from 2005.)

It would be a final irony that the creator of the most popular sci-fi franchise in history would doom his own series to creative irrelevance by his unwillingness to field fresh perspectives for his live-action series. I say, let Pegg have his shot writing an episode of the new series. For that matter, open up the franchise to other writers and directors for reinvention.

What do you think, PopWatchers? Should Lucas field fresh ideas from other filmmakers for the future of Star Wars? And what directors would you choose? Or is Lucas so synonymous with Star Wars that asking somebody else to try their hand at it would be like asking someone other than J.K. Rowling to write a Harry Potter book?
Posted by Robalini at Thursday, August 21, 2008