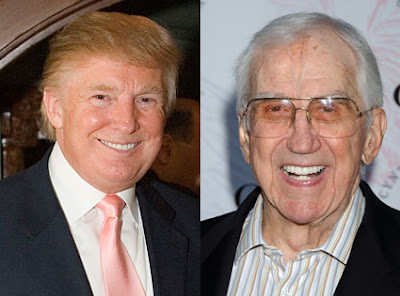 Ed McMahon's Beverly Hills home is about to become one of the best houses in the world.

The Los Angeles Times reports that Donald Trump, he of the gold-plated everything, has agreed to buy McMahon's mansion so that the financially strapped TV icon can avoid foreclosure and continue to live there.

And they aren't even golf buddies!

"I don't know the man, but I grew up watching him on TV," Trump said Thursday. Helping him would "be an honor."

The real estate tycoon said that he plans to buy the six-bedroom, five-bathroom residence from the lender and lease it to the former Tonight Show wingman and his wife, Pamela, who are behind on more than $640,000 in payments on a $4.8 million mortgage loan.

It wasn't the Apprentice honcho's original plan—the deal reportedly went down after McMahon's listing agent flew to New York to propose the idea to Trump in person. But Ivanka's pop proved to be the man for the job.

"When I was at the Wharton School of Business, I'd watch him every night," Trump added. "How could this happen?"

No one is sure, although McMahon has said that spending more than he made over the years probably did it. That, and he hadn't been able to work until recently because of the broken neck he suffered in a fall about 18 months ago.

The one-time Star Search host's home has been on the market for more than two years, most recently listed at $4.6 million. He reportedly paid $2.6 million for it in 1990.

Since his financial troubles came to light, McMahon has been sued at least three times over unpaid loans and legal fees. He has also filed suit against the owner of the home where he fell and against Cedars-Sinai Medical Center, which he accuses of providing him with shoddy care for his injuries.
Posted by Robalini at Thursday, August 21, 2008